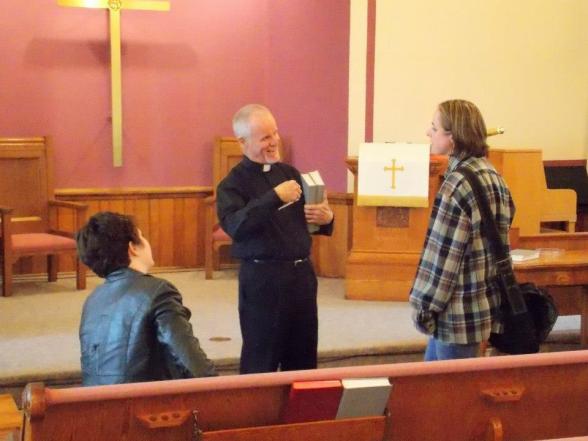 This past weekend the Mid Ohio Filmmaker’s Association in Columbus, Ohio held its first official 3 Day Crime Wave competition.  The competition is a similar concept to the 48 Hour Film project.  The difference is that it is run a lot more loosely than the 48 Hour Film Project, its local to Columbus, and you get 72 hours to make a film instead of only 48 hours.  I have to tell you.  Having that extra day makes a huge difference.  First of all, there is actually time to get some sleep.  With the 48 Hour Film project there is no time for sleeping what-so-ever.  Every 48 Hour Film project I have participated in with Off Pudding Productions I have killed myself.  As 1st AD I always get to about 3:00pm in the afternoon on Saturday and feel like I could pass out at any given moment.  I even warned Rusty Hopkins the director last year that he might find himself managing a crew of about 15 alone at any moment.  Luckily, I didn’t pass out, but it sure felt close. 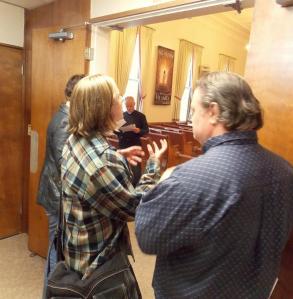 The other great thing about the 3 Day Crime Wave is that there is still a pretty stringent time constraint so there is no time for dilly dally when one is not sleeping.  I think only one person in our crew actually spent less time sleeping this time around, and that was Christopher Donnelly.  We began shooting on Friday evening at the Westerville Inn in the seediest motel I was able to find in less than a week.  At our pre-production meeting, Jon Plante, team Off Pudding’s writer, asked that we find him a church with pews and an old school motel.  This was on Saturday afternoon about a week before the start of the competition. 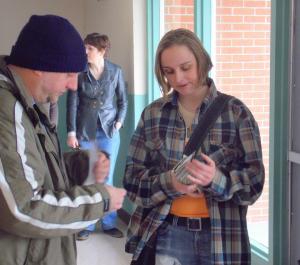 It became my responsibility to find the two locations and to line up craft services this time.  Our usual craft services go to guy and gal opted not to do it this time around.  Especially after the logistical nightmare we encountered on “Split” last summer combined with several unexpected extra mouths to feed.  Luckily, I was able to land Deb Soper on short notice to come out and handle that part of the shoot.  She worked on Horrors of War which is where I first encountered her and her husband Ken Wilson.  Ken Wilson did weapons on Horrors of War. 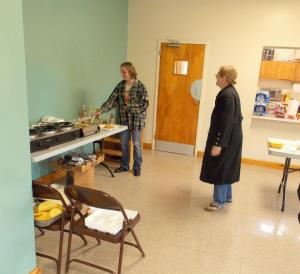 On Thursday evening as the competition was kicking off, I was given the green light by Outville Presbetyrian Church in Outville, OH to use their church as our church location.  It didn’t hurt that by pure luck they were having their trustee meeting the week of the competition.  Had it not been for that I doubt we would have landed that awesome location.  Not only that, but it didn’t hurt that it was the church I went to growing up.  Many of my older relatives are quite active members of the church still.  I’m sure it was quite a spectacle for my aunt and her husband to witness the process of the making of a film unfolding on Saturday afternoon. 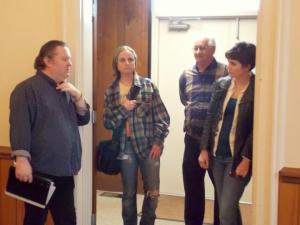 I was able to secure the Westerville Inn through renting the room for the weekend.  We didn’t inform them of what we were doing inside the room.  After having called an old school motel in Kirkersville, OH, and discovering they had had a bad experience with a film crew in the past, I decided to keep that under wraps.  Our crew was uber small this time.  We only had myself as AD, Russell Hopkins directing, and Chris Donnelly as our DP.  Luckily at the last minute Scott Summit stepped up and volunteered to help me crew, and became our awesome 2nd AD.  I had a sizeable on camera role for this one so I definitely needed a go-to-guy.  Scott was a life saver for me on this shoot.  He also played a role as one of the confessors in the movie. 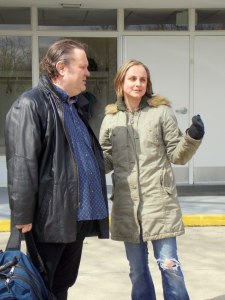 The film is just under 10 minutes in run time.  Chris Donnelly edited for us which is why he didn’t get any sleep those last few days.  We had several actors on the shoot including John Newkirk, and Jim McCullough who played the lead of Father Greene.  Alycia Yates, Off Pudding’s producer, played Sam, a hillbilly con artist.  I played the role of Mindy her sidekick con artist.  Bethany Schoeff was also a part of this production as she has been with Off Pudding for at least the past three productions.  Along with Bethany we had Natalie J Steiman, and Andy Falter as confessors, and Amy Talbott also landed on set to play the role of the church lady.  Amy is an awesome improv artist and someone whom I consider to be one of my improv and acting mentors.  Sadly, she is moving on to bigger and better things in Boston next month.  It was a pleasure to get to shoot a scene with her in the film. 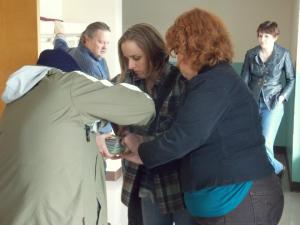 I spent most of my on screen time working with Jim and Alycia.  It was a blast for me to work alongside them on camera rather than just as their AD.  Rusty Hopkins had directed that I play the character of Mindy similarly to a character I played called Ronduh in the short mockumentary “Grudge Match.”  The two characters are similar, but there are nuanced differences.  Ronduh was a good basis for Mindy.  Alycia delivers her character’s moments perfectly and I love Sam’s quote about the “abobo.”  Clever writing by Jon Plante translates into an excellent performance from Alycia Yates as well as Jim McCullough.  Rickne Scheid was gracious enough to join us again to be our on set photographer.  He has documented the last three Off Pudding productions.  His photography is amazing.  Rickne is so unintrusive with his glimspes into the process and into the personalities that make up the process each time. 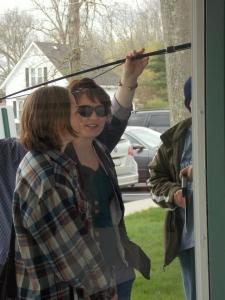 From what I understand the screening for all of the 3 Day Crime Wave entries will be on Sunday, May 19th at 2:00pm.  The location of  the screenings is 3055 Indianola Ave, Columbus, OH 43202, at Studio 35 near Clintonville.  For more information on that I would recommend visiting the MOFA website if you would like to come out and see the final product of “Coathanger” or any of the other films made between April 19th and 21st.  I will include a link on this page for viewing in the future when MOFA approves that it can be shown outside of the initial screenings.  Until then, hope to see you at the screenings!  If you’re not local see ya soon anyway. 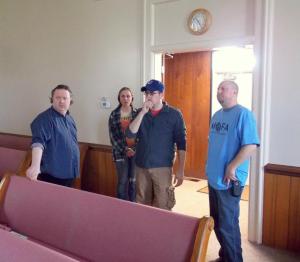 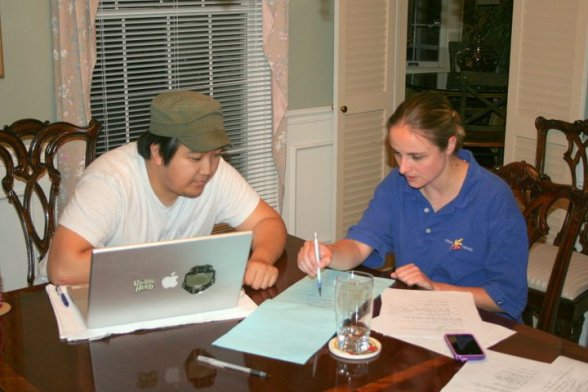 The following video is last year’s 48 Hour Film Project that I A.D.ed on for team Off Pudding. We drew horror last year as our genre. Appearing in the photo is Director of Photography Lynn Padetha. He is awesome to work with and a very ambitious up and comer in my opinion.
Team Off Pudding also is fortunate enough to have an on set photographer who documents our shoots. Rickne Sheid is a fabulous and passionate photographer outside of our shoots as well. He publishes a lot of his around the world photography.
Last year our team members Rickne and Jim McCullough hosted the team in their home where all of our scenes were shot. Their home was also our team base camp where we did all of the writing and editing for the film.
Last year’s film starred Jim McCullough, Alycia Yates, Jason Smith, Bethany Scheoff, Tina Gleason, Jacotti Sommes, and Mark Schuliger. The film was directed by Chris Donnelly, and produced by Russell Hopkins and Alycia Yates.